For new negotiators and old, this paper is worth reading. It give a full overview and the long-term impact it had with crisis and hostage negotiations in the U.S.

It's a "must read" for those who want to understand how and why law enforcement crisis/hostage negotiation procedures were created. The tragic consequences of inexperience, lack of an established base of knowledge and training, combined with poor situational judgment during a hostage incident in 1971, resulted in significant changes in the application of the Federal Tort Claims Act to allegations of negligence on the part of crisis negotiators. The incident, as a glaring example of everything not to do in a hostage event, has influenced the subsequent development of fundamental knowledge, training, and skills for police crisis negotiations.

Read the full paper [HERE].
Email ThisBlogThis!Share to TwitterShare to FacebookShare to Pinterest


Terrorists holding 20 people hostage in the Bataclan concert hall spoke to police negotiators five times on a mobile phone before officers finally stormed their hideout and brought the siege to an end.

Elite RAID anti-terrorist police arrived at the theatre to find darkness and silence broken only by the sound of mobile phones ringing unanswered in the pockets of the dead and the survivors pretending to be dead.
“When we went in, it was really dark. There were dozens of bodies lying on top of each other on the ground, the dead, the injured, the survivors who were pretending to be dead,” a policeman identified only as Jean told the TF1 television channel.
“It was like Dante’s Inferno,” another officer told Le Monde. The smell was unbearable, the silence appalling, he said....

Having checked the upper floor, the police came to one last door, behind which they thought the remaining bombers were holed up. A voice came from the other side of the door – a hostage who had been sent as an intermediary.
“He shouted out that the terrorists were there and that if we opened the door they would blow everything up,” said Jean.
Behind the door, the terrorists were inflicting mental torture on their 20 hostages. One of them, Sebastien, who has since emerged as a hero after pulling the pregnant woman hanging from the windowsill to safety, said: “They asked us if we agreed with them. I'll let you imagine the lingering silence of that moment. The most timid nodded their heads and the most daring said 'Yes.'
"They asked us to serve as look outs, to yell at the police to stay back and that if not they would blow up their explosive vests.”

The terrorists agreed to give the police a mobile phone number and at 11.27pm the first contact was made. A specialist negotiator, who had also spoken to Coulibaly during the Hyper Cacher siege, asked for their demands.
“They didn’t want to free the hostages. They said get out or we will shoot and we will decapitate the hostages,” said Jean. They also said they would throw a body out of a window every five minutes.
Over the next 50 minutes four more calls were exchanged, but the negotiations led nowhere.
Read more from the telegraph.co.uk [HERE]. 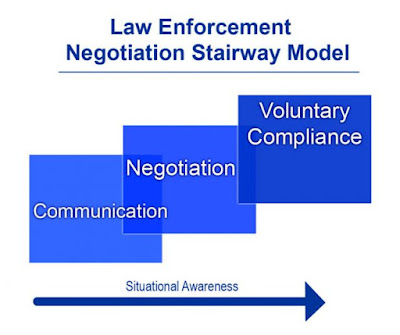 The goal in law enforcement crisis situations where crisis and hostage negotiators are being utilized entails influencing a behavioral change in someone in order to gain voluntary compliance. Although initially this statement might sound jargon-filled, it simply means using a set of skills to get a person to stop acting the way he or she currently is and getting that person then to act the way you want them to.

The following are the core skills taught in initial law enforcement crisis and hostage negotiation courses across the world. Although you as the reader most likely will never be negotiating with someone threatening suicide on the ledge of a bridge or claiming if their demands are not met they will take someone’s life, you deal with your own crisis situations daily. This ranges from decision-making strategies at work, giving directives to employees, making a sales pitch, negotiating terms of a contract (a house for example), and determining financial and budget plans.

The skills are active listening, using time, demonstrating empathy and building rapport, influencing the other person, and the concept of control. Each skill is further discussed [HERE]. 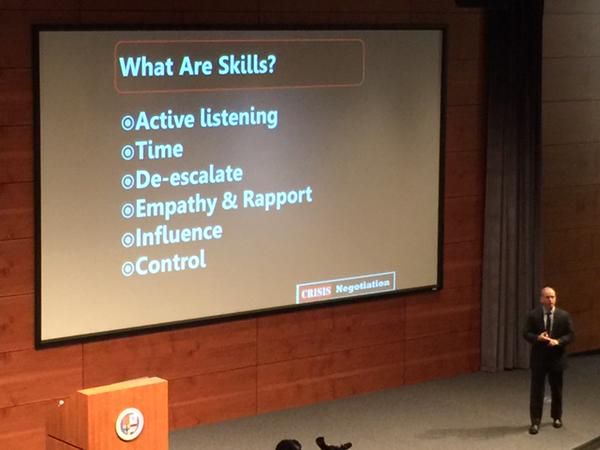