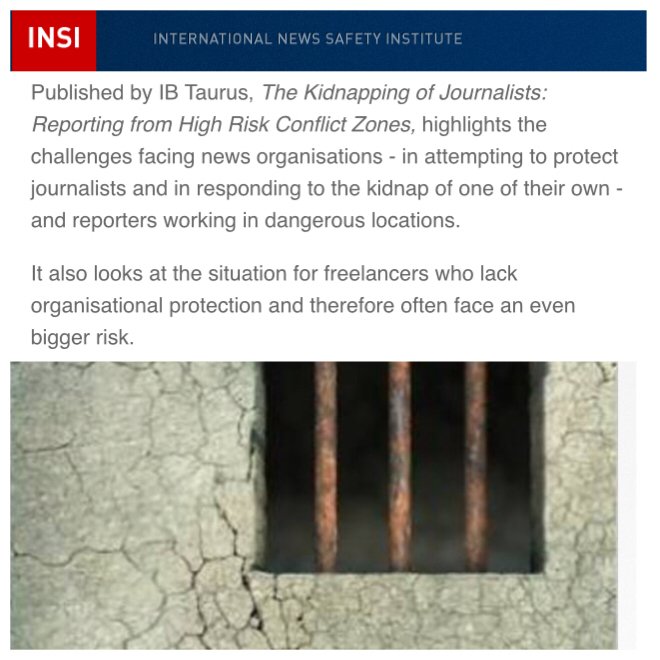 (Newssafety.com)- The International News Safety Institute is pleased to announce the release this week of a new book on the kidnapping of journalists co-authored by INSI Director Hannah Storm.
The book, which was written with Professor Robert Picard from the Reuters Institute for the Study of Journalism at Oxford University, has been called “the most comprehensive and useful account to date of every journalist’s worst nightmare” by The Sunday Times foreign correspondent Christina Lamb, OBE.
Published by IB Taurus, The Kidnapping of Journalists: Reporting from High Risk Conflict Zones, highlights the challenges facing news organisations - in attempting to protect journalists and in responding to the kidnap of one of their own - and reporters working in dangerous locations.
It also looks at the situation for freelancers who lack organisational protection and therefore often face an even bigger risk.
Read more [HERE].
Email ThisBlogThis!Share to TwitterShare to FacebookShare to Pinterest

THE police commander in charge of what were the final moments of the Lindt Cafe siege had no idea the gunman had fired three shots, and not two, until just six weeks ago.

Mr Jenkins, who was at the Police Operations Centre, said it was not until 1.27am that he was told Monis had demanded the lights go off.

He said he felt optimistic at that time that police could use this as bargaining chip to get the female hostages released.

Read more from the dailytelegraph.com.au [HERE].
Email ThisBlogThis!Share to TwitterShare to FacebookShare to Pinterest

HNT Skills: What is Grit?

There are plenty of articles written about the skills of effective crisis hostage negotiators. I should know I have written a bunch myself!

We have read plenty of times the importance of active listening, being calm, verbal/non-verbal communication, slowing things down, and building rapport but what is it that keeps us sharp and competent to continually assist people in the midst of a crisis?

Angela Duckworth tells a compelling story why it very well might be grit and how it is what keeps us going forward. 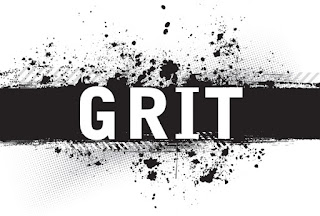 Her research has shown that long-term success relies more on more on persistence than smarts. Yes, grit - perseverance and passion for what you do - is the key.

How do we cultivate grit?

Here's an interesting online course being offered at the University of Maryland on terrorism, hostage and kidnapping negotiation, and more. 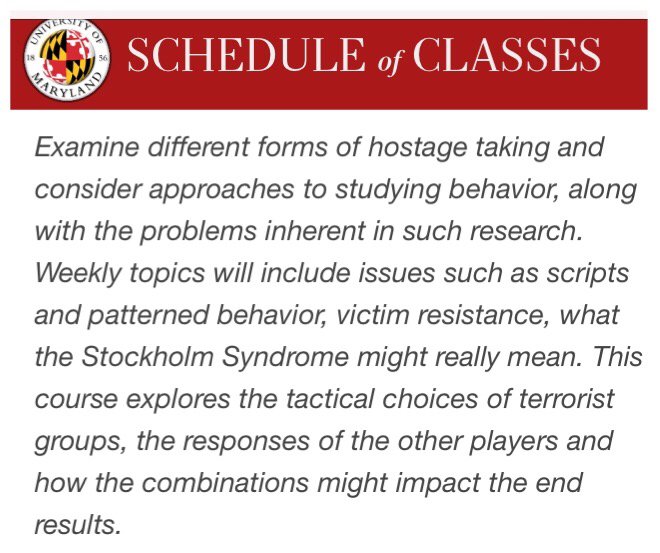 Man With Gun During Standoff Streams It Live on Facebook


A man who had been issued a Florida mental health warrant Facebook live-streamed a dramatic four-hour stand off with police, while he hid in his house wielding a gun.
Tampa police were called to Adam Mayo's property on May 9 after his mother became concerned for his safety, a spokesman told Mail Online.

Judy Mayo had alerted police after her son had told her he had stopped taking his psychiatric medication and had sent her photos of a gun.

Businessinsider India
CHRIS VOSS, "NEVER SPLIT THE DIFFERENCE"-
The win-win mindset pushed by so many negotiation experts is usually ineffective and often disastrous. At best, it satisfies neither side. And if you employ it with a counterpart who has a win-lose approach, you're setting yourself up to be swindled.
Of course, as we've noted previously, you need to keep the cooperative, rapport-building, empathetic approach, the kind that creates a dynamic in which deals can be made. But you have to get rid of that naivete.
Because compromise - "splitting the difference" - can lead to terrible outcomes. Compromise is often a "bad deal" and a key theme we'll hit in this chapter is that "no deal is better than a bad deal."
Even in a kidnapping?
Read more [HERE].
Email ThisBlogThis!Share to TwitterShare to FacebookShare to Pinterest

I owe my life to those who paid my ransom. But should Ottawa pay ransoms? No

There is an audio file stored on my mom’s computer, labelled “The Bad Call.” It’s a recording of a two-minute call between her and me on Sept. 9, 2009. I had, at that point, been a hostage in Somalia for over a year. My captors — a radicalized criminal group — were pointing guns at my head. I had shackles around my legs and had endured almost daily abuse. It was not uncommon for them to beat me or otherwise push me to the brink of desperation and then immediately dial my mother’s cellphone number.
Why? Because they wanted a ransom.
With the brutal murder of Canadian hostage John Ridsdel in the Philippines this week by terrorist group Abu Sayyaf, the ransom debate is again playing out. Prime Minister Justin Trudeau affirmed the Canadian government’s long-standing ban on paying ransoms for hostages:

“Paying ransom for Canadians would endanger the lives of every single one of the millions of Canadians who live, work and travel around the globe every single year,” he said.

...The Harper (Canadian) government told my family from the start that it couldn’t, and wouldn’t, negotiate a ransom deal with my captors. But it did say many times that it had a great track record of bringing hostages home safely, without payment.
Read her full article at the National Post [HERE].
Email ThisBlogThis!Share to TwitterShare to FacebookShare to Pinterest
Newer Posts Older Posts Home
Subscribe to: Posts (Atom)