How kidnapping insurance keeps a lid on ransom inflation 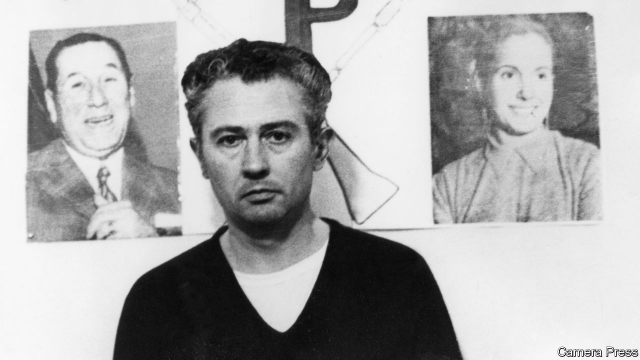 IN THE early 1970s, leftist guerrillas in Argentina discovered a lucrative new way to make money: kidnap millionaires. Panicking firms would agree to huge ransoms, more concerned with freeing their executives than driving down the fee. That was not just bad for businesses. It also became a textbook case of how poor negotiating can send future ransoms rocketing and attract new entrants to the kidnapping trade.

The best can get a ransom down to 10% of the initial demand. They can also calm criminals who may consider harming hostages to induce distraught relatives to pay up. In kidnappings motivated by money, a hostage’s risk of death during negotiations is 9% without K&R insurance, but just 2% with it, according to Anja Shortland, who is writing a book about kidnapping insurance. Kidnappers rarely know if a victim is insured.

...Insured negotiations are almost always carried out by family members, with calls recorded and trained negotiators giving advice. In countries where kidnaps are common, the police are seldom involved.

Read more from the Economist [HERE].
Email ThisBlogThis!Share to TwitterShare to FacebookShare to Pinterest

This new issue of CREST Security Review (CSR) highlights research on influence, from the powers of persuasion to the ethical challenges of some techniques.

(Via Crest Research)- Salespeople, politicians, work colleagues – we’re surrounded by people trying to influence us, and of course we try to influence them too.
This issue of CSR gives an insight into some of the latest research on influence, from the ethical challenges of some techniques, through how people can be primed to be persuaded, to how to inoculate people from being influenced by fake news.
In this bumper edition of CSR there are more articles than ever before. For a whistle-stop tour through the topics and tactics of influence, check out the A-Z, pulled together by the guest editor, Lorraine Hope, and Wayne Thomas.
Outside the issue’s focus on influence, Emily Corner writes about mental disorder in terrorism, mass murder and violence, stating that we should move away from pathologising violence. Meanwhile, Samantha McGarry draws on her research on National Action, to look at whether increased fragmentation in the far right could lead to more extreme responses to Islamist violence.
As always, this latest issue of CREST Security Review is available to download, read and share for free here.

If you saw Sue Williams in the street, you couldn't possibly know what an important role she plays in society. She appears to be a nice but very normal English lady, with a faint London accent. However, as we found out during her keynote at ProcureCon Indirect last week, her work and experiences are totally out of the ordinary!

She is a professional hostage negotiator, having worked for the UK Metropolitan Police for many years, ultimately leading the Hostage Crisis Unit at New Scotland Yard. She has worked around the world and now operates as an independent, working mainly for NGOs and charities who themselves operate in dangerous parts of the world. She also lectures at institutions in several countries, including the Saïd business school at Oxford.

We wondered whether there was really enough work for a full-time “kidnap consultant”, but as she explained, it isn’t just hostage situations where her skills are utilised. She is really a crisis negotiator in a more general sense, so suicide interventions, which require listening, not problem solving, have been part of her work, along with domestic barricade situations, crimes gone wrong (bank lock-ins), or persuading criminals who have been located to turn themselves in.
Read more from Peter Smith/SpendMatters.com [HERE].
Email ThisBlogThis!Share to TwitterShare to FacebookShare to Pinterest 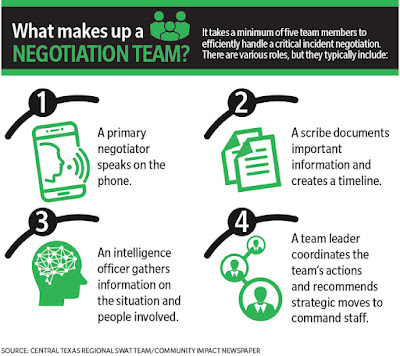 “I am very proud of their first-place achievement as it is a direct testament to their ongoing hard work and dedication as well as the successful collaboration across agencies.” Try to See Things my Way? The Role of Perspective Taking in Eliciting Information 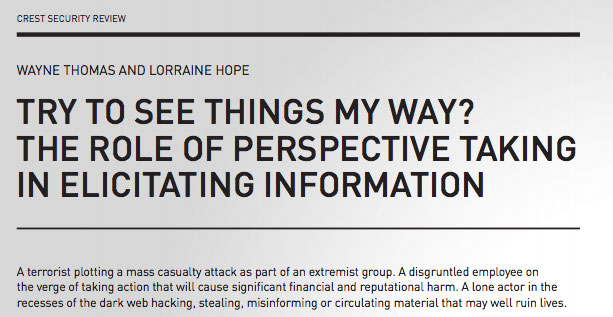 The following is an excerpt from the latest CREST Security Review (Issue 8). You'll see how from the snippet below, the material is directly applicable to those working in crisis situations be it as as law enforcement negotiator, crisis intervention specialist, crisis counselor or another type of role.

Research suggests that we are overly pessimistic about our ability to get others to cooperate with us. In reality, it can be difficult for someone to avoid cooperating with a reasonable request because of the social factors involved...

The task of forming an accurate model of another person’s perspective is a difficult one, involving a cognitively demanding and time consuming process of anchoring and adjustment. This begins with anchoring our assumptions in our own understanding and then adjusting these through a series of cognitive leaps, forming and testing hypotheses until we reach what we consider to be a plausible approximation of the other person’s perspective.

Does the U.S. No-Concessions Policy Deter Kidnappings of Americans?

"It is the responsibility of governments to apprehend kidnappers and destroy their organizations, whether the hostage-takers are motivated by ideology or by greed. But that does not preclude private efforts to save lives."


Brian Michael Jenkins, of the RAND Corporation, released Does the U.S. No-Concessions Policy Deter Kidnappings of Americans? I encourage you to read the full report [HERE].

More from the report:

Proponents of the government’s no-concessions policy argued that it was also an effective deterrent. However, RAND researchers found the evidence to support this contention meager and unconvincing.


Here, he importantly points out the difference  between terrorist and criminal kidnappers:

The Logic of Deterrence Logically:

a no-concessions policy should be a deterrent to kidnapping. No concessions means denying a reward to the kidnappers, thereby removing the incentive to kidnap Americans. Unrewarded behavior is unlikely to be repeated, or so the argument runs. This might be the case for criminal kidnappers who seek only cash, but simply removing one kind of reward does not mean that terrorists, who also have political objectives, could not still obtain other kinds of rewards through kidnappings. I will return to these non-financial rewards later.


His assessment, after reviewing the data:

The available evidence shows no correlation between national policies on concessions and the nationalities of hostages.


Again, I encourage you to read the full report [HERE].
Email ThisBlogThis!Share to TwitterShare to FacebookShare to Pinterest


HOMEWOOD, Ala. — A Homewood police officer is credited with talking a suicidal man off a ledge Monday. And it was all caught on camera. WVTM 13's Marlei Martinez tells you what the crisis negotiator said that convinced the man to change his mind.

Officer Blackmon speaks calmly, a trait that helps him crises like this. He said, " I didn't try to solve all of his problems at once. Just small steps to solve that that big problem. And the first step is coming off that bridge.

Read more and watch the full interview [HERE].
Email ThisBlogThis!Share to TwitterShare to FacebookShare to Pinterest

SUBTLE INFLUENCE AND INFORMATION DISCLOSURE: HOW PRIMING WORKS IN INTELLIGENCE 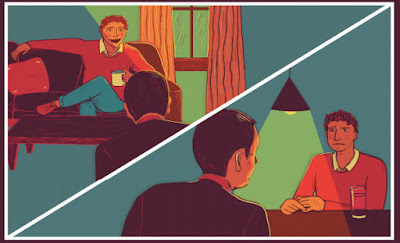 The following is an excerpt from the latest CREST Security Review (Issue 8). You'll see how from the snippet below, the material is directly applicable to those working in crisis situations be it as as law enforcement negotiator, crisis intervention specialist, crisis counselor or another type of role.


Thus, to facilitate the likelihood that alMekki would disclose information, Soufan shrewdly increased al-Mekki’s perceptions that he was respected by altering the previously bare interview room to resemble a homely living room. In addition, Soufan allowed al-Mekki to remain uncuffed during their interview sessions and, when attempting to elicit information, Soufan drew on al-Mekki’s need for respect by being firm but friendly and respectful.


PRIMING TO PROMOTE INFORMATION DISCLOSURE
Social psychologists refer to such tactics, where a particular perception or motivation is covertly increased to influence a target’s behaviour, as priming. An emerging body of psychological research suggests that priming motivations, which is likely to promote information disclosure, leads interviewees to share more information in intelligence interviews...


HOW DOES PRIMING WORK?
Current theories of priming suggest that in the first instance priming increases the ease with which the primed motivation, for example the intention to offer beneficial assistance to another, comes to an individual’s mind. This initial step in the priming process is important because, due to their subtle nature, individuals typically misattribute the ease with which the primed motivation comes to their mind as self- rather than prime-generated...