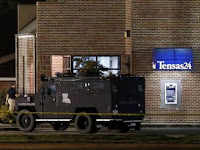 An armed siege at a bank in north-eastern Louisiana came to a bloody conclusion as a gunman shot two hostages, killing one, before being shot dead himself by armed police.


Shortly before midnight on Tuesday, following an 11-hour standoff, the 20-year-old suspect, Fuaed Abdo Ahmed, told police negotiators he intended to kill his hostages. A SWAT team stormed the building in the small rural town of St Joseph, but were too late to stop Ahmed shooting the two victims, a man and a woman, both in the upper body. They were rushed to hospital, where the man later died. The woman, LaDean McDaniel, was in critical condition.