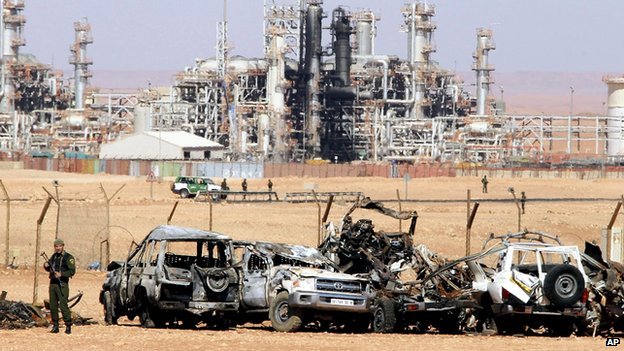 The survivors of January's siege of an Algerian gas plant still cannot believe they are alive. Forty of their colleagues died when Islamic militants took them hostage. The Algerian army opened fire on the convoy of hostages and terrorists as they broke out of the plant. It is only now that some have felt able to tell their stories.


For BP team leader Lou Fear and his wife Lori at home in the UK, the morning of 16 January 2013 began as usual with a text message from Lou. But the content was anything but normal.
It told her terrorists were roaming around - the plant was under attack. Lou was barricaded in his office with some colleagues and hiding behind a filing cabinet. The militants were just outside.
"Somebody tried the door handle and they were saying, 'Come out, come out, we're friends,' in Arabic," says Lou. "I would never have believed it would be a terrorist attack. It was incomprehensible, but it was real."


"My world just froze… I couldn't think what to do," says Lori, thousands of miles away in Lincolnshire.
"I didn't know what circumstances he was in, if he was close to the terrorists, if they could hear the beep of the messages come in. I did not dare to reply to  it. Maybe I would give away his hiding place."