HARVEY, Ill. (WLS) -- In an ABC7 exclusive, a key hostage negotiator gave Eyewitness News an inside look at how he and others helped bring that suburban standoff in Harvey to a peaceful end.

It was a worse-case scenario: six kids and two adults held at gunpoint by two men who had already shot two police officers. State police, the South Suburban Emergency Response Team and the Cook County Sheriff's Police all came together with one goal: get everyone out alive. It ended almost a day after it began. 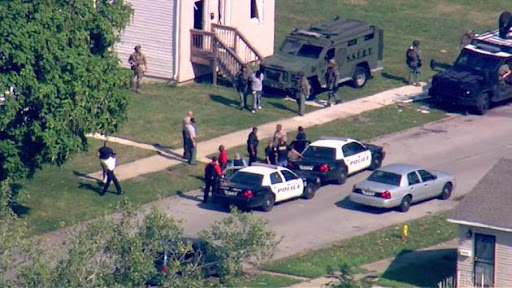 Around 9 a.m. Wednesday, SWAT team members removed windows and doors from the building after
a 20-hour standoff in Harvey, Illinois.

..."They wanted cigarettes. Not a problem. We went down to the store, purchased some
cigarettes and we were able to trade two packs of cigarettes in exchange for one of
the children. (Good trade.) Obviously a fantastic trade," said Rule.