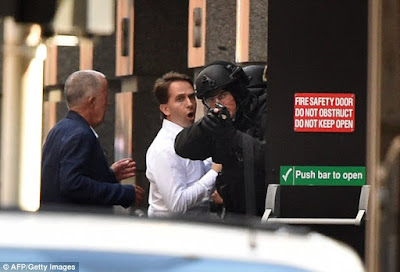 A plan to negotiate the release of half the hostages trapped inside the Lindt cafe in exchange for Man Haron Monis getting radio airtime was never put to the gunman.
It has been revealed that just two hours into the siege the NSW police assistant commissioner Mick Fuller approved negotiations for the release of half the hostages in exchange for agreeing to Monis’s demand he be allowed to speak on the ABC.

But the head negotiator, who on Monday denied undermining his commanders after the proposal was never put to Monis, said he stood by his opinion at the time that it was too dangerous and conflicted with a standing policy to not negotiate with terrorists.

Senior sergeant identified as ‘Peter’, who also had no counter-terrorism experience, describes himself as ‘not real good with technology’ at inquest

The primary police negotiator during the Lindt cafe siege had never worked in a hostage situation and had no counter-terrorism experience other than role playing with colleagues, an inquest has heard.
The senior sergeant, identified only as “Peter”, on Monday also told the inquest into the 2014 siege that he was “not real good with technology” after being asked about missing recordings of conversations between negotiators and hostages, made in the early hours of the deadly event.
The recordings, which have never been found, cover a period up until 1.16pm on the day of the siege, during which the negotiation team worked from a 4WD, before moving to a gaming manager’s cramped office at a nearby leagues club.


Sydney siege inquest: Any ‘police failings need to be dealt’

DURING the last hour of the Sydney siege a police negotiator wondered if hostage Selina Win Pe was suffering “Stockholm Syndrome” after hearing her sympathise with gunman Man Monis.

The negotiator, known for legal reasons only as Darren, told the inquest that a colleague sent him a text message just before 1.30am on December 16, where he detailed what he heard Ms Win Pe say to Monis.

She was heard to say on a listening device that she was sorry about the way he [Monis] was being treated during the Lindt cafe siege, and it was this that made Dan wonder if she could be suffering from “Stockholm Syndrome”.

...In a further revelation on Thursday, Darren said he learned that Monis fired a shot at the escaping hostages — and not into the air — after a call from Julie Taylor, who was among the group who escaped at 2.03am.

Asked if he passed the information on, Darren said…

One landline, a mobile phone and three dictaphones: Inside the cramped room where Sydney siege negotiators attempted to bring the terror attack to an end

THE first a police negotiator knew that Sydney siege gunman Man Monis wanted the lights in Martin Place switched off was when a desperate hostage called and said they were going “to be shot’’ if the demands weren’t met.

The negotiator, codenamed Matt, wasn’t told of the demands at an official handover that Monis wanted the lights outside the Lindt cafe switched off.

In a call at 12.52am on December 16, 2014, Selina Win Pe told him they had made the request two or three hours ago and Monis wanted to know why it hadn’t happened.

...Mr Downing asked Matt several times to offer a view about whether he thought the fact he wasn’t told about the lights demand was a “failure in handover”.