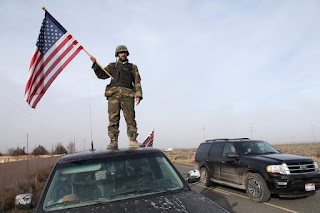 FBI negotiator Marc Maxwell testified Wednesday that he tried to listen to the concerns of the last four holdouts at the Malheur National Wildlife Refuge in late January and early February, establish a rapport and show some empathy with the hope of coaxing them toward a peaceful outcome.
Jurors heard recordings of four calls that the FBI agent had with defendant Jeff Banta, between Jan. 27 and Feb. 4., as Banta, co-defendants David Fry, Sean Anderson and his wife Sandra Anderson huddled in the refuge's west end encampment, which occupiers dubbed "Camp Finicum.''
Read more at OregonLive.com [HERE].
Email ThisBlogThis!Share to TwitterShare to FacebookShare to Pinterest
Newer Post Older Post Home