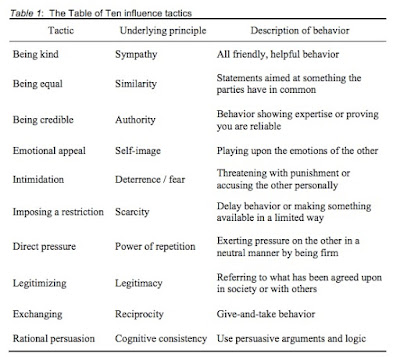 Importantly, this distinction brings to light a fundamental tension that exists in crisis negotiations.

On the one hand, police negotiators must work hard to reduce the emotionality of the crisis, which they achieve through empathic, uncritical messages that are supportive of the perpetrator’s concerns about issues such as personal safety and self worth.

On the other hand, however, there is a need for police negotiators to acknowledge the inappropriate actions of the perpetrator and work towards a realistic, substantive resolution. This side of negotiation is inherently less empathic and more focused on content, with negotiators often unable to conciliate to the perpetrator’s demands and compelled to disagree over the form of a resolution. As Taylor and Donohue (2006) note, police negotiators are required to handle the complexity of expanding the “emotional pie” as well as expanding the traditional “substantive pie.” The tactics outlined in Table 1 help negotiators achieve both of these objectives.

The Table of Ten has reportedly helped police negotiators in their efforts to diversify their use of influence tactics, and facilitated their efforts to switch between different tactics to suit the goal and conditions at hand. This may be especially true during periods of interaction when negotiators are seeking to make sense of the situation and break through undesirable interaction patterns

The Table of Ten provides a way of monitoring negotiators use of the available repertoire of influence tactics.

If they have inadvertently focused their messages around content-focused persuasion, then this becomes clear in the monitoring process and the negotiators can consider whether or not it is worth switching to some of the relational focus influence tactics, such as Being equal and Being kind. Moreover, by keeping a log of a perpetrator’s responses to different influence tactics (either mentally or physically using a chart), negotiators are able to develop a useful portrait of the perpetrator’s responses to different attempts at influence.

...By associating research findings with different tactics in the framework, police negotiators are able to bring to their strategies a clear understanding of the complex cue-response relationships that have been identified in the influence literature.

For example, one important message from our research is that use of Rational persuasion and Intimidation is likely to be more effective in negotiations with perpetrators from low-context, rather than high-context, cultures. 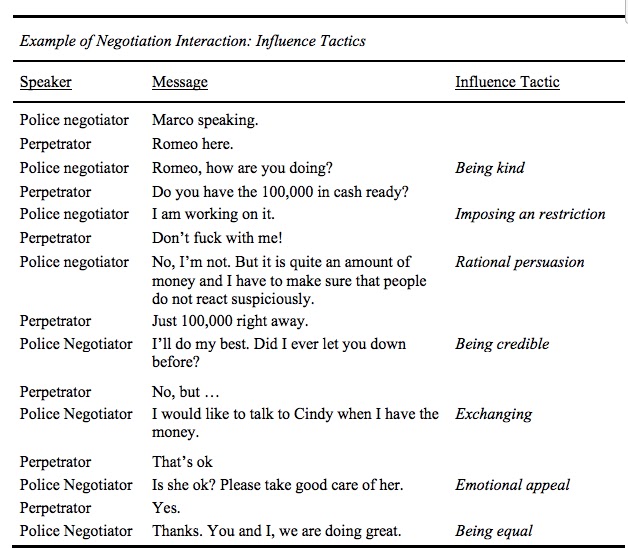 Thus, when negotiating with a perpetrator from a high-context culture, police negotiators might consider making less use of rational persuasion and more use of affective influence tactics, such as Emotional appeals. Our research to date suggests that this approach is likely to receive a more positive response from the high-context perpetrator.