Happy new year everyone. I hope the new year is off to a great start for each of you. Make sure to have a look at each story below, I think they are all worth it. One of the best ways to stay sharp is reading!

Last month we held our 3rd annual Resilience Symposium where for the latest version, we had space experts from NASA and other organizations share about their great work and resilience. A bunch of video snippets and full sessions have already been uploaded. Take just over one minute to watch this one - I think it will resonate with many of you.

Police Resilience Training (Free!)
Due to some partnerships and grants, I have some opportunities to provide free (yes free!) resilience training for police personnel. These workshops have already been given to police personnel across the country (and world) with some really great feedback and published research on it.
At the moment, there are opportunities for agencies in the following locations only:
Last thing I will say is if you know me, this type of training is not "check box training" - it's designed by police for police. These training and workshops have also be given specifically to negotiator teams including those recently in the FBI - NJ and Toronto.
If your agency is interested (this is not for individuals to sign up), send me an email, or a message on LinkedIn.
42nd Annual Hostage Negotiation Seminar 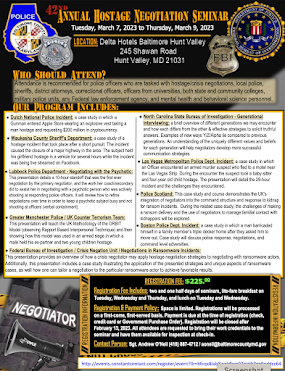 Once again one of the top negotiator events of the year is coming up. Make sure to mark your calendar. Have a look at the image, so really interesting presentations.
Crisis Negotiator Skills: The Experts Weigh In

(From the article) 90% either always or usually debrief after an incident. This highlights the importance of reflecting afterwards on what worked and did not work in order to improve effectiveness for the next incident. Experts in crisis incidents do not “wing it.” Rather, they know what works, how it works, and analyze incidents afterwards in order to continue doing what is effective and know what is not effective so they can try to avoid it next time.

‘You’re pathetic.’ Texas police negotiator insults man on ledge, stirring anger online
Full story here
Mississippi police kill woman holding hostage inside Walmart store and demanding to speak to a news anchor
A video posted to social media showed a woman holding a gun in one hand and using the other hand to hold onto a person wearing a Walmart employee vest. The woman with the gun yelled that she needed help and wanted to talk to a news anchor.
Full article at CBSnews here.
Ransomware Attacks: Tips And Tricks For Getting A Favorable Deal
3. Be Honest
Trust me when I say people can see through falsehoods, sooner or later. If you’re trying to buy time or mislead the attacker, it can cause them to cut off communications, and that’s the last thing you want. So, be honest and tell them that you need time to arrange the money. Or, you can even tell them that their demands are beyond your capacity. This sort of blunt honesty might bring you closer to finalizing a deal.
Read more from Techgenix here.
(Movie Review) 'The Point Men' recounts S. Korean hostage crisis in Afghanistan
"The Point Men" sheds light on the 2007 South Korean hostage crisis in Afghanistan by focusing on the desperate rescue efforts, walking the fine line between what happened on stage and behind the scenes.
...In July 2007, 23 South Korean missionaries are taken hostage by the Taliban, and a South Korean negotiation team is dispatched to Afghanistan.
Read more from Yahoo!News here.
Northeastern professor’s new book trains crisis negotiators for life-or-death calls
“From these maps,” Kevoe-Feldman says, “we can identify specific patterns and communication practices that work well, and we can pinpoint points of miscommunication.”
Read more from Northeastern here
Did you know? Hostage negotiators sharpen their skills in San Marcos
The training this week at Texas State University this year attracted almost 30 hostage negotiation teams from across the U.S. and from as far away as Singapore.
Read more from CBS Austin.
Kidnapping for ransom: the new normal
...The abductor directed her to bring the money to Adama without stating where. As soon as they have the money, her brother will be released, the abductor said.
The conversation went on. “I’ve never seen that much money. How am I going to get you this right now?” she asked. The kidnapper immediately lost interest in continuing the conversation. She insisted on engaging in bargaining, giving her a little bit more time to speak.
Read more from The Reporter here