Standoff between military vet, police comes to an end in Kentucky 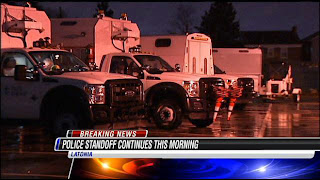 Facebook once again played a role during a hostage situation.  The incident involved shots fired by both the subject and the police, while also three children were released during the negotiations.

A standoff lasting more than 24 hours between police in northern Kentucky and a military veteran suffering from post-traumatic stress disorder who barricaded himself and his three children inside his home has finally ended.
Army veteran Michael Vaughan surrendered after firing at police around 12:40 p.m. and then suffering a wound in his arm through return fire, according to the Cincinnati Enquirer.

He was reportedly being taken to a hospital in Cincinnati, which is 10 miles north of his home in the Latonia neighborhood of Covington.
The matter was initially a hostage situation, but the Kentucky State Police told FoxNews.com the veteran released his three children earlier on Sunday morning after continued negotiations with police.
And although Vaughan’s Facebook page was taken down at some point during the crisis, the veteran had posted several messages to it about his motivations and ongoing life troubles as the drama unfolded.
A Facebook page devoted to local news in Latonia -- posted a screenshot of one of Vaughan's comments in which he reportedly wrote: "I appreciate everyone’s comments, but this is something that will happen. KY Guard has the blame ... along with the Dept. of the Army and Sen. Rand Paul’s office for not giving a damn about their wounded veterans who asked for help and failed to get it."
Read more [here].
Email ThisBlogThis!Share to TwitterShare to FacebookShare to Pinterest
Newer Post Older Post Home