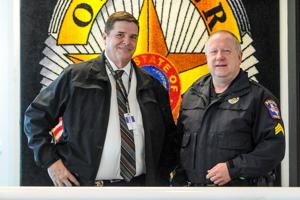 The Allen Police Department Hostage Negotiation Team has received recognition for a different kind of work outside the typical line of duty….
“When people reach a point that they call a suicide line, they’ve usually lost all hope and they feel helpless,” he said. “You build a rapport with them, and you use active listening skills. You’re listening to them more than you’re talking.”
Now, once a month, the hostage negotiation team – Felty, Such, and officers Matt Johnson and Richard Ferguson – heads to the Dallas center to work the suicide hotline. Felty said the officers usually take 15-25 calls per shift, and that the average call lasts 45 minutes.
Read more at starlocalmedia.com [HERE].
Email ThisBlogThis!Share to TwitterShare to FacebookShare to Pinterest
Newer Post Older Post Home