A man who remained near the top of an 80-foot tall sequoia tree in downtown Seattle on Wednesday, and has refused hours and hours of police coaxing to come down, has become an Internet curiosity.
Seattle police said when authorities arrived at the base of the lofty conifer next to Macy's department store, the man refused to speak with them and threw an apple at medics.

"Issue appears to be between the man and the tree," Seattle police tweeted.

By Tuesday afternoon, police said traffic was being tied up as officials closed nearby roads as a precaution.

"It is quite a spectacle, honestly," police spokesman Patrick Michaud told the Seattle Times.
From another report:
SEATTLE - Last week's standoff with a man who climbed to the top of downtown Seattle's iconic sequoia tree tied up 70 Seattle police officers, administrators and crisis responders for 25 hours, along with four fire engine companies, battalion command staff and two SWAT teams, according to court documents released Monday.

"This caused an incalculable waste of time and services and arguably the efficacy of local law-enforcement's reaction time to other serious calls for service around the city," court documents say.
In addition, the drama caused nearly $8,000 in damage to the tree itself, according to documents, which also say that a firefighter was nearly struck by a large metal ring the man threw down from the treetop.

And one other article:


Miller’s mother, Lisa Gossett, of Wasilla, Alaska, said she had not talked to her son for about five years when a friend called saying he was on the news.

She said she could hardly recognize him.

“There are all these people out there worried about the tree, but they’re not worried about him, the human,” she said. “He’s obviously sick.”

She said Miller had been a “regular” kid with attention deficit disorder until his late teens or early 20s, when he came up to visit her in Alaska and she noticed that something was “off.”

When she straightened his room, she noticed he had knives stashed under a pillow. He warned her there was an evil “presence” in the house and while they were out to eat he insisted “everybody” was looking at him.

“I did not know it was mental illness at first,” she said during a telephone interview on Monday. 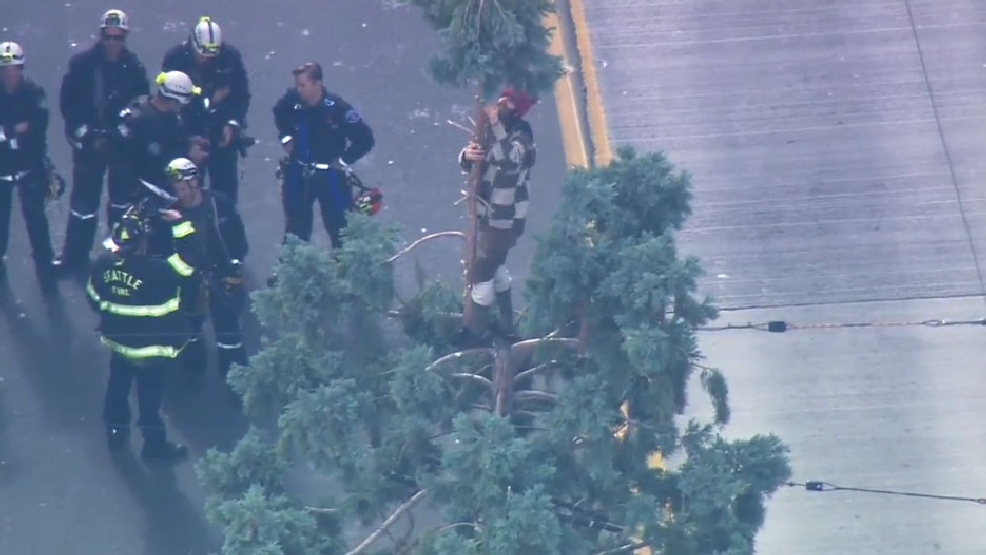